Chorus set out to create a “town hall” of discussion, which would have people better informed on what’s going on in the world of UFB. And from this vision, The Download was born. 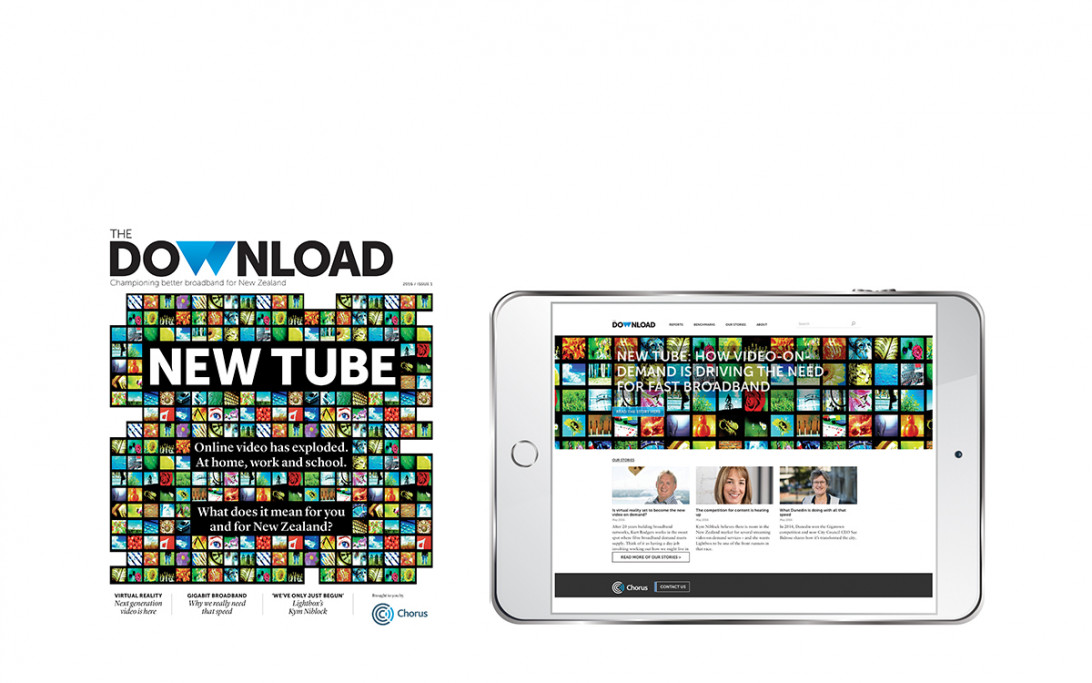 If you think Chorus has been sitting still since launching its highly publicised Gigatown campaign, you’d be wrong. The organisation has been gradually rolling out Ultra Fast Broadband (UFB) across New Zealand, hastening the pace of peoples’ internet by laying thousands of kilometres of fibre optic cable and ducting.

And now, the organisation has launched a layered content-led campaign which consists of a quarterly magazine and a website. Featuring a collection of stories about fibre and how it can enhance Kiwis' lives at home, at school and at work, the initiative is designed to inform while simultaneously telling the story behind the massive goal of giving super-fast internet to as many people as possible. In addition the publication also documents the progression of fibre’s roll out in the country, providing information about exactly what it delivers and why it should be treated as the fourth utility (alongside water, electricity and gas).

With the decline in traditional media, a lot of specialist journalists have been let go, meaning there aren't as many scribes around to help brands tell their stories, says Chorus general manager corporate relations Ian Bonnar. “So for our sector to be able to report on it effectively it’s really hard to do that without a degree of history in it and telcos are an interesting one as it brings politics, economics, and consumer stuff in a way that’s quite complex …” He says because of this decline, there hasn’t been the same public platform for debate about issues relevant to Kiwis.

So, Chorus set out to create what Bonnar calls a “town hall” of discussion, which would have people better informed on what’s going on. And from this vision, The Download was born.

The print version of The Download is not going out to the general public, but rather to a list of 1000 highly targeted people who are close to Chorus’s industry and are likely to be influential in some way, says Bonnar. He says Chorus made the decision to have The Download in hard copy and online so people can get to the stories in whichever way they find most accessible. “I think there’s still a good argument for print for people who are relatively time poor that will actually pick something up that looks attractive and read it at a time that suits them,” says Bonnar. “Our publishing schedule is going to be quarterly which reflects the fact that we wanted it to be quite thoughtful and we can provide different perspectives.”

He says it was also important to have journalists writing stories to cut out any jargon. Bonnar says he was particularly impressed by the way that Tangible Media was able to take what is an esoteric topic and relay it in a way that anyone could connect with. “We love this stuff and we live in it every day and if we weren’t geeks we ultimately wouldn’t be working in it and a really good publishing partner can make sure that you are not assuming too much of your readers, which is a bit of a telco disease.”

He says the website will be more subdued with its output, and won’t necessarily have a daily publishing schedule. “We aren’t trying to replicate daily news, it’s more in that thoughtful, considered space.” The content on the website is also easily shareable on social media, and will be pushed out through Chorus’s own social channels.

He says each issue of The Download will be updated with information about what’s been going on in the industry. “[Like] how many people are connected and who’s using what kind of connection … the idea is that there will be an announcement of those things and new information and context as well as a broader discussion.”

Brands are increasingly steering away from more shouty advertising, as a result of consumers doing the same, which is why Bonnar says Chorus opted for a content marketing approach. “If people pick it up and just see a Chorus propaganda vehicle, it’s not achieving what needs to be achieved, which is a place where these things can be discussed. So it’s top of mind that it’s credible, otherwise it’s a waste of money.”